During summer and autumn 2020, we continued our monthly surveys in the Richmond River, Tweed River and Gold Coast estuaries to monitor the dolphin populations at each of these sites. 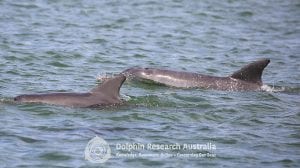 Mickey and her calf surfacing in the Tweed River, New South Wales.

Weather conditions challenged a few of our surveys in the Tweed and Ballina sites. Rain didn’t stop us from finding some of the resident dolphins in the Tweed River though. During our February survey, we quickly came across a nursery pod of five dolphins, feeding on a high incoming tide. The group included Mickey (ID #15), who has been seen regularly in our Tweed surveys over the last six months along with her calf, who was hunting in between spells of nursing her growing calf.

Gold Coast – Meet Smudge (ID # 24), one of the resident Gold Coast Indo-Pacific bottlenose dolphins. We first met Smudge in 2010 during our very first surveys in the area. During our recent February survey in the Gold Coast-Broadwater, we observed Smudge with her 2-3 year old juvenile socialising with four other animals near Runaway Bay. The other animals appeared to be males who all new individuals to our catalogue. As part of our Healthy Waterways-Healthy Dolphins Project, we will continue to monitor Smudge, her calf and other dolphins in the Gold Coast region to understand their health and population status. 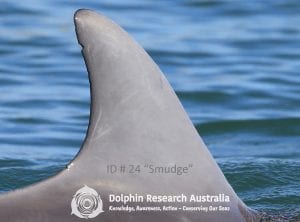 Thanks to our project partners, City of the Gold Coast, Tweed Council, Out of the Blue Adventures and Gold Coast Marine Training for getting us on the water!

Read about Gold Coast’s dolphins and download the FinID Card﻿