Getting to Know the Dolphins of the Gold Coast 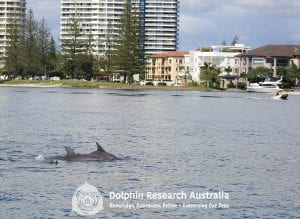 These early surveys revealed that there are multiple species that inhabit the Gold Coast region throughout the year. The most abundant species are the Indo-Pacific bottlenose dolphins.

The coastal habitat of the Gold Coast region includes complex estuarine systems and sheltered waters protected by barrier islands (North and South Stradbroke Islands) and the Southport Seaway spit. These waters we refer to here collectively as The Broadwater. To the east of the barrier islands and mainland are exposed coastal waters which are dominated by surf zones, sandy substrate and scattered rocky reefs. Currumbin and Tallebudgera Creeks are located towards the southern reaches and flow directly to the ocean.

Some individual dolphins move in and out of the region and only briefly visit the region. However, others are highly resident and have limited home ranges and remain in the Gold Coast region.  These individuals make up what we call the ‘resident communities’ and it is these dolphins that our research is particularly focused on. It is apparent that some individuals and communities prefer different habitats, with some almost exclusively using The Broadwater, while others prefer the exposed coastal habitats.

Higher densities of dolphins in the Gold Coast region are found nearby estuaries (including Currumbin Creek and Tweed River) and major outflows (including the Jumpin bar and the Southport Seaway).

In 2018, Dolphin Research Australia were successful in receiving funding support from the City of the Gold Coast to re-commence surveys of this dolphin population. Recent surveys have focused entirely on the resident dolphins that use The Broadwater as part of our Healthy Waterways-Healthy Dolphins Project.

Each month, our team of dedicated Dolphin Ambassadors conduct field surveys of these waters, searching for dolphins and recording their behaviour, habitat use and take photographs to identify individuals.

What dolphin species are found in the Gold Coast?

The Gold Coast is home to a number of different species that can be seen year-round. 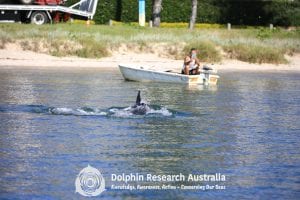 Why are the Gold Coast dolphins important? 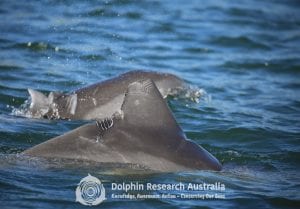 Chopper (ID#10) has survived shark attacks, fishing gear entanglements and a boat strike is seen here with her 2-month old calf called ‘CJ’ (back) with large propeller cuts from a boat strike in the Gold Coast, Queensland.

The Gold Coast region is one of Australia’s fastest growing human populations and has experienced substantial changes over time due to intensive usage from agricultural, industrial and urban land use which has led to declines in system health and coastal habitats. Coastal and marine species, including dolphins, are highly vulnerable to threats posed by human activities in the region including pollution, increased sedimentation, dredging, fishing activities, boating activities, habitat degradation and coastal development. Along the coast, dolphins of the Gold Coast are also at risk from entanglement in shark nets and shark drum lines. Once entangled in a shark net, the dolphins perish as they are usually unable to reach the surface to breathe. 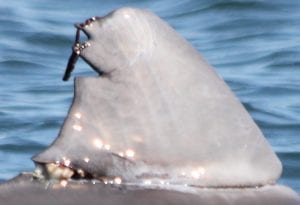 As top predators, dolphins are bioindicators of environmental health and also vulnerable to the cascading impacts of threatening processes. The dolphins of the Gold Coast live in a highly utilised, modified and impacted environment. By understanding the health and status of these dolphins, we can improve the protection of this population and their environment.

During early surveys, this species was observed frequently east of the Jumpinpin bar (between North Stradbroke and South Stradbroke Islands). We rarely observe this species in The Broadwater. Individuals of this species identified off the Gold Coast appear to be a separate community to those living in Moreton Bay (as confirmed through photo-identification of individuals).

From our research, we have been able to confirm that some individual humpback dolphins have remained in the area for at least 10 years. The abundance and status of Australian humpback dolphins that utilise the Gold Coast is currently unknown, but likely to be less than 100 individuals. 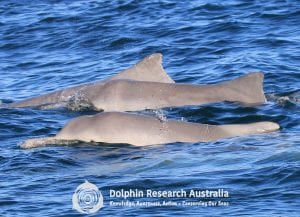 Indo-Pacific bottlenose dolphins are the most frequently seen species in the Gold Coast region. The population appears to be fragmented, with some communities preferring to remain in certain areas of the coast and others near estuarine waters.

Along the coastal zone, hotspots of Indo-Pacific bottlenose dolphins exist around the Currumbin Creek, Durranbar and Jumpinpin. At this stage, we have been unable to accurately estimate the abundance of dolphins that use the open coastal habitats.

Our research has focused on the resident community of bottlenose dolphins that frequent the Broadwater.  From our early surveys, we estimate that this community consisted of around 17 individuals (95% CI 22.31 – 31.42) in 2010-2011. Using data from citizen science records, a student from Griffith University, recently confirmed that some of the individuals in this southern resident community have been in the region for at least 30 years. Our recent surveys confirm that many of the adults seen in 2010 and 2011 are still in the region.

The majority of individuals within the southern bottlenose dolphin community are females, however, we know that at least one male alliance is also part of this community. The females in this community are very tightly bonded. Calves can be born throughout the year, but we do find a peak in births during the warmer months of late summer through to autumn. The community regularly forages and feeds throughout the Broadwater region. At times, females from this community they can be seen foraging up to 15km up the Nerang or Coomera Rivers chasing prey.

From analysing the scarring patterns and injuries on the southern resident dolphins, we know that the majority of this community have scars from shark bites, entanglements in fishing gear and boat strikes. Their reliance on the Broadwater region which is also one of the busiest for human activities in the Gold Coast region, makes this community highly vulnerable. We are continuing to work on understanding the health of the southern resident dolphin community.

Our surveys are currently focusing on this community of resident dolphins to determine their status, health and habitat use as part of our Healthy Waterways-Healthy Dolphins Project.

Every dolphin is unique

Using unique patterns of nicks, notches and injuries on the dorsal fin of dolphins to identify individuals. Here are just a few of the distinct fins of some of the resident Indo-Pacific bottlenose dolphins of the Gold Coast. 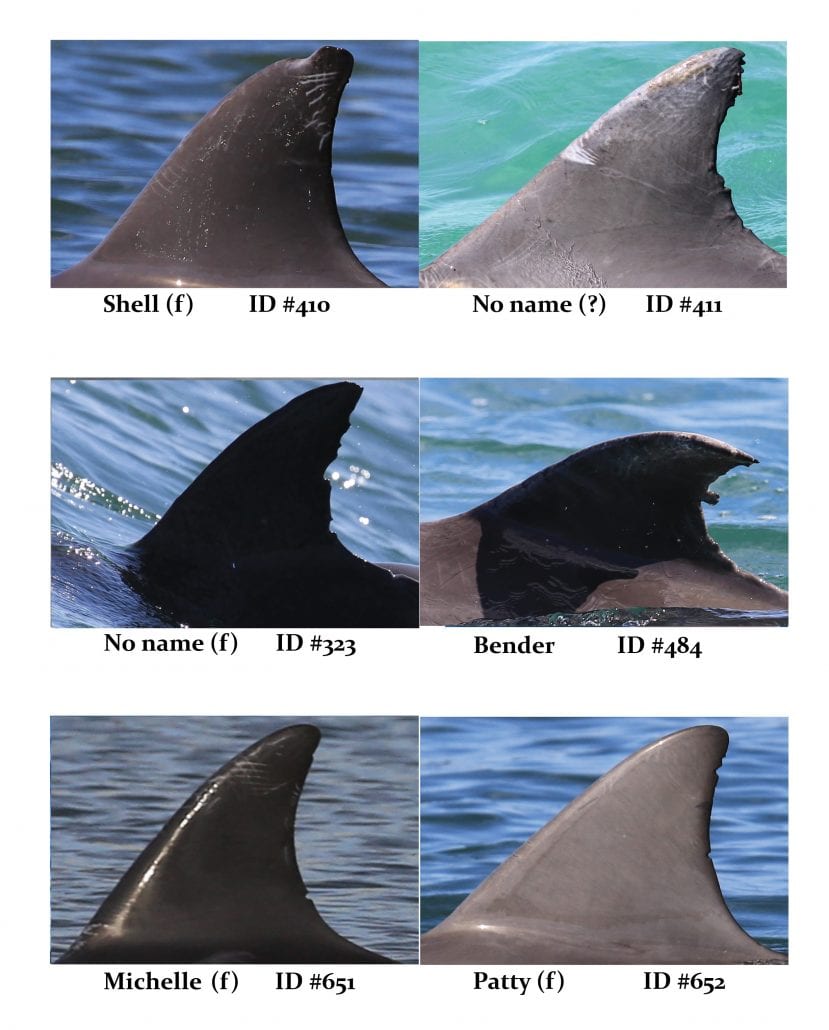 Learn more about observing dolphins, how to interpret behaviours and take photos to help identify individuals and monitor populations.

Help to monitor the Gold Coast Dolphins, become a Dolphin Watcher and report your dolphin sighting.