Two species of dolphins, the Australian humpback dolphin (Sousa sahulensis) and Indo-Pacific bottlenose dolphin (Tursiops aduncus) inhabit Moreton Bay all year round. These species are the focus of our Moreton Bay Dolphin Research Project, particularly the humpback dolphin which has been classified as Vulnerable and a species of high priority. Assessing the trends in abundance and ecology of dolphin populations requires long-term research projects to determine the health and risks associated with threatening processes. 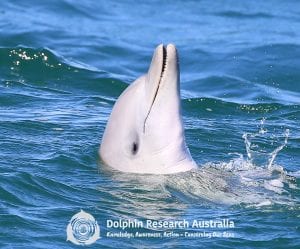 Bottlenose dolphins are the most common species spotted in Moreton Bay, with a population size estimated to be approximately 554 (95% CI: 510–598) individuals3. This is then divided into northern and southern sub-populations, evidenced by genetic differences4 as well as strong distinctions between habitat and diet linked with geographical location5. The smaller southern population of 172 (95% CI: 163–182) individuals is generally found in shallow (<15m) nearshore areas of the Bay, while the northern group of approximately 446 (95% CI: 336–556) individuals prefers deeper (<23m), open waters of northern-central Moreton Bay3. Despite their mobility and social nature, it appears that these two sub-groups rarely interact.

Their diet generally consists of a range of fish, cephalopods (octopus, squid, and cuttlefish), crustaceans and sometimes small rays. However some differences in diet have been noted between northern and southern populations. Northern dolphins seem to feed on higher trophic level prey in more pelagic, offshore habitats while southern dolphins appear to forage in demersal and/or benthic habitats closer to shore on lower trophic level prey5.

These dolphins are well-equipped to catch prey and often work cooperatively. Some individuals have adapted to the increasing presence of humans and vessels in Moreton Bay, learning to chase trawler boats to catch discarded fish6. These feeding strategies and prey preferences significantly affect the structure of social systems in the Bay. Bottlenose dolphins form strong bonds with those that they reside and forage with, and rarely interact with those with differing foraging techniques.

These resident populations of Moreton Bay are highly susceptible to both commercial and recreational influences, being located close to the busy port in the Brisbane River as well as increasing land development following human population growth. Exposure to pollutants, boats and vessels, entanglements in fishing gear, and unregulated feeding are all major cumulative threats to dolphins in the Bay. These dangers are exaggerated for the southern population due to their small population size and high fidelity, making them extremely vulnerable. 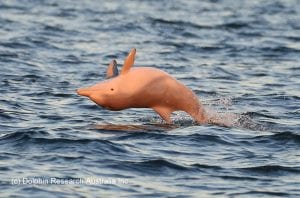 Less common than the bottlenose, Moreton Bay’s population of Australian humpback dolphins is only estimated to be 128 individuals as of 2016 (95% CI: 67-247), representing a relatively large population at medium density compared to other sites7. This is the southern-most reach of this species’ range, and likely demonstrates the ecological limits of what humpback dolphins can tolerate. This population based on a sexually segregated society and is also fragmented, with five distinct social communities being identified. There is a great degree of residency of individuals, where there is little interaction between different communities7.

This species tends to remain in shallow (<20m) waters close to deeper channels, estuaries, mangroves, reefs, sandbanks and occasionally surf zones. The area beside to the Port of Brisbane is part of their core habitat, with resource availability also influencing consistency of habitat use in other areas of the Bay7. Humpback dolphins will typically forage when tides are high, locating prey in murky coastal waters using echolocation.

In additional to usual social interactions, humpback dolphins have been observed playing with shells, sponges, jellies or seaweed with one another. Though when it comes to human presence, this species is quite shy and tends to avoid both passing and approaching boats2.

The high level of residency in this population, though perhaps conferring benefits for resource familiarity and social interactions, also puts this species at risk by local threats. Their preference for these coastal waters puts them in close proximity to commercial and recreational activities, pollutants, strikes from vessels and risk of entanglement. 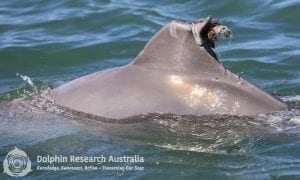 Why are Moreton Bay’s dolphins important?

Bordered by the bustling cities of South East Queensland and the beautiful Moreton, North Stradbroke and Bay Islands, Moreton Bay (Quandamooka) is a special place. Yet, there are many pressures on the natural environment and wildlife as a result of human activities. Located adjacent to one of Australia’s major cities with a rapidly increasing population, and a major Port, has led to rapid changes and increased pressures to the habitats and wildlife of the Bay in recent decades. This has seen increased pollution, sedimentation, habitat degradation, coastal development, boating, fishing and tourism activities in the Bay which in turn, presents a cocktail of threats to the local dolphin populations.

These dolphins are not only important to sustain a functioning ecosystem, but also economically and culturally. The Quandamooka People have shared a strong connection with the dolphins (Buangan) for generations. Yet, the future of dolphins in Moreton Bay is uncertain in the face of cumulative pressures posed by human activities which raise concerns about the health, well-being and status of these populations. Our research is critical to ensuring the protection and conservation of the dolphin populations by providing an understanding of and monitoring their health and status.