You are here: Home / About Us / News / Research / Dolphin Research Project Updates Spring 2020 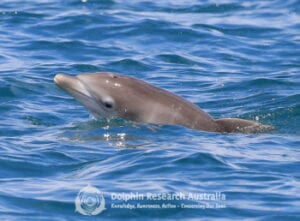 A neonate Indo-Pacific bottlenose dolphin surfaces for a quick breath off Tangalooma in Moreton Bay. This calf was only day/s old when the crew encountered the nursery group of over 20 individuals during one of our October surveys.

It’s been a nervous time over the last few months as we have had to wait to access our Moreton Bay field site. The site was made inaccessible due to Covid restrictions between July and October. We are happy and relieved to report that the restrictions have recently eased allowing us to re-start our 2020 Moreton Bay field research season with small teams of experienced crew. We completed the first block of field surveys in late October and had some incredible encounters with some old dolphin friends.

During these surveys, we encountered lots of newborn Indo-Pacific bottlenose dolphin calves! We observed at least 5 neonates that were only 1-2 days old in both the southern and northern parts of the Bay. When born these calves are just 85-112cm in length. They will spend at least the next 2-4 years dependent on their mothers before being weaned and entering the years of adolescence. While births can occur throughout the year for this species, peaks do occur in the warmer months of the year. 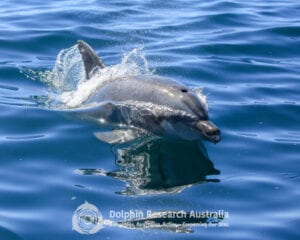 A common bo􀆩lenose dolphin porpoising off the coast of Cape Byron, NSW.

Thanks to the Cape Byron Marine Park Authority, we have been able to continue our regular surveys in Byron Bay. We not only encountered the resident Indo-Pacific bottlenose dolphins resting and feeding close to Cape Byron, but also a very active and interactive pod of common bottlenose dolphins.

Common bottlenose dolphins (Tursiops truncatus) are larger than their Indo-Pacific bottlenose dolphin cousins. Growing up to 3.8m in length, they are typically found further offshore in the Byron region. We encountered the pod 2 nautical miles due east of Cape Byron. They became very curious and approached us, bow riding and inspecting what we were up to on the boat. At one stage, we had 10 dolphins bow riding the tiny 3m boat! Using a GoPro to film underwater footage, we were able to sex a number of individuals and can confirm the group included both males and females. The largest of the males was almost the size of the boat.

We have continued our monthly surveys in the Tweed River estuary thanks to the assistance of Tweed Council who generously supplied a vessel. The team have searched carefully each month and have had no luck with finding dolphins during the surveys.

We asked the community to give us a hand to find out when the dolphins are using the river and have received a number of reports from keen Dolphin Watchers in the region. These sightings have been really helpful! We hope to find the dolphins during our next monthly survey.

We are currently looking for a vessel that we can use to continue the Gold Coast and Ballina monthly surveys and hope that we can resume as usual at these sites very soon. 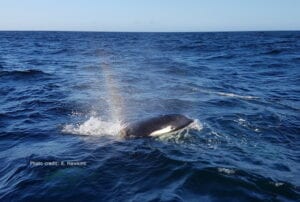 Dolphin Watch Citizen Science – Reports from around the Country

There have been many interesting sighting reports coming in during the spring months from Dolphin Watchers around the country.

Three orcas were seen on 2nd October feeding on bottlenose dolphins and a humpback whale calf off Ballina, New South Wales. The incredible sighting was reported by Out of the Blue Adventures and we are working closely with Killer Whales Australia to identify the individuals against their Eastern Australian identification catalogue.

In October, we received a sighting report of an Australian humpback dolphin off Brunswick Heads in New South Wales. This is the first sighting of this species we’ve received during the months of spring in the region. The adult humpback dolphin was seen with a group of Indo-Pacific bottlenose dolphins.

We also had an exciting report of two Bryde’s whales feeding on baitfish with ‘hundreds’ of dolphins off Lennox Head in northern New South Wales.

Cetacean sightings continue to occur at Bribie Island and the team have documented in excess of 550 sightings so far this year. Typically, the species encountered are Indo-Pacific bottlenose dolphins and Australian humpback dolphins, but in recent months, increasing numbers of humpback whales have been observed as they migrate southward.

Female Australian humpback dolphin ID#173 with her 2-3 year old calf that has a fishing gear entanglement around it’s tail stock and a severe injury from a boat strike on its caudal peduncle (lower back) off Bribie Island, Queensland. (Photo credit: Tee Cee)

In July, the team recorded their first sighting of common dolphins travelling quickly southward into Moreton Bay, and in September a pair of snubfin dolphins were observed swimming quickly northward within 100 metres of shore.

Sadly, since July, there have been three entangled humpback dolphins in Bribie waters. One of these was successfully disentangled by Marine Parks, but another had been unable to feed for quite some time and did not survive. The humpback dolphin that died as a result of being entangled in fishing gear (a rope presumably from a crab pot), was first seen by our research team during our field surveys in 2019. The dolphin was a young female known as ID # 194.

There remains one entangled humpback dolphin (also a victim of vessel strike) that has eluded rescue teams despite considerable effort expended attempting to locate and assist it. This is another young dolphin of 2-3 years of age, born in 2018 to its mother ID #173. The prognosis for this young dolphin isn’t good as its condition has declined drastically. Losing two young animals within months from this discrete and highly local community of Australian humpback dolphins due to fishing gear entanglements and vessel strikes is very concerning!